Fathers Day Ideas for under £10

This is a bit of a strange post for me to write. For the last 19 years since my Dad died we haven't really bothered with Fathers Day....in fact I've positively tried to ignore it. The last couple of years since Chick has been in touch with her Dad I've mainly let her choose something from Tesco and I've not really had to put much thought into it!

This year however Chick decided that as well as buying something for her Dad, her and the boys also wanted to buy something for The Man. With the kids being 10, 6 & 4 we've ended up with a range of cute presents that I thought I'd share with you in case you're stuck for ideas, the best thing being that they are all under £10.

As most of you probably know we are massive readers in this house and that's the same for the boys too so we were hugely excited when Little Tiger Press sent us two books as presents for The Man. The first one is by the award-winning Steve Smallman, author of Smelly Peter the Great Pea Eater and Dragon Stew and is called 'My Dad': 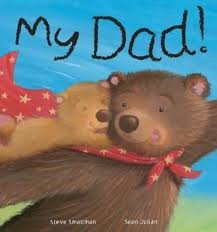 It's a really lovely book with rhyming text and will be great for all of the boys to read together. It is also full of fabulous illustrations: 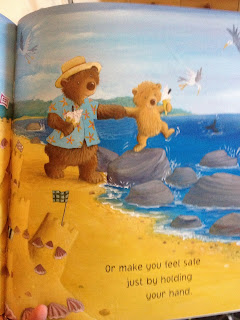 We were also lucky enough to be sent a more grown up book which Chick will give to him. This is 'To Dad, You're a Star' by Jill Latter. It has a really cute front cover with a fabric polka dot star and again lovely illustrations which will hopefully tell him how much he means to her:

We are big fans of the 99p shop (yes, I'm cheap!!) and so have also picked up a couple of bargains from there: 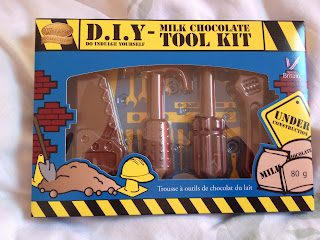 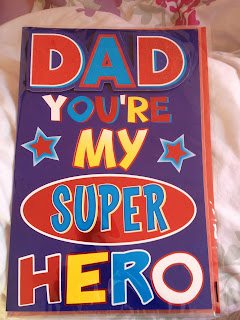 I was happy with all of the above as I think that makes a pretty good Fathers Day but Chick had seen a Vistaprint advert on TV and wanted to make him a t-shirt. Our piece de la resistance to wow The Man on Fathers Day is this: 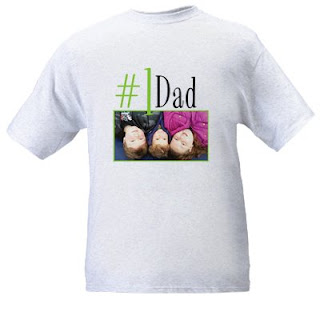 The best thing about it about from the personalisation, that Chick chose herself, is that it only cost about £8! I shall let you know on Sunday if he's happy with it or not!

Do you have any cheap and cheerful ideas for Fathers Day??

As most of you probably know, I'm a bit of a hoarder. The things that I have the most of are photos, shoes and books so when someone offers me the chance to review one of these items especially one that is slightly different then I normally jump at the chance.

Printer pix gave me a choice of products and upon browsing through I decided that I loved the wooden blocks. I am running out of wall space unfortunately so I thought that this was a great idea as it can be free standing as well as mounted on a wall. I generally go back and forth with which pictures to transform into an art keepsake but luckily The Man and I recently had our engagement photo shoot so I knew straight away which picture I would use.

The online service was simple and easy to use and my order came within a couple of days. It was really well packaged too so that there was no damage. On really close inspection the picture wasn't quite flush with the block but when I mentioned this to Printer pix they immediately sent out a replacement block. 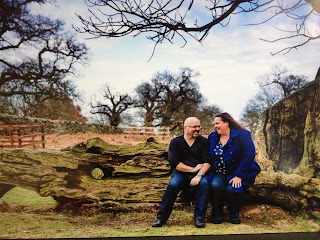 I love this picture as it's so colourful and bright and the trees and sky look amazing. The block has managed to capture everything that I love about the picture and it has pride of place on my fire: 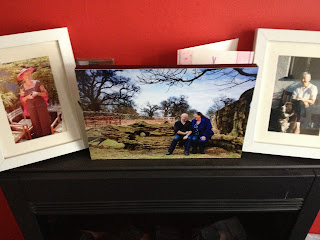 The block is sturdy and well made, which is always a bonus when you are clumsy and so is your daughter. 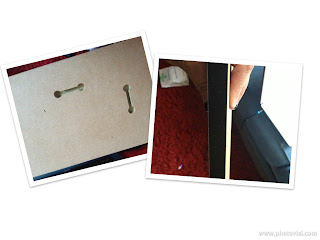 The block that we chose was sized at 12" by 8" and is priced at £40 however because it looks so amazing I really wish that I'd been brave and ordered the biggest 20" by 16" size. I'm also eyeing up their hard cover photo books as they would be a great keepsake.

Check out their website for some great deals on lovely gifts for Fathers Day too!
Posted by Emma at 19:28 2 comments:

As most of you probably know, I'm a huge fan of shoes. I have rather a large collection for all manner of events.....birthday party shoes, wedding shoes, everyday shoes, restaurant shoes.....you know the type that are so high that you can only wear them from the house to the car and from the car to the restaurant table??!

Imagine how thrilled I was then to get an email from Cheeky Shoes co-creator Macin asking if I would like to review a pair of flat, bright, happy shoes. With Summer just around the corner I could hardly say no! I was directed to the website to pick the shoes that I wanted and was met by a gorgeous array of bright colours:

I ummed and aahed for ages over which pair I might pick as to be honest I liked all of the colours. Taking into account that the majority of my wardrobe is black with some purple thrown in, I decided that I would go with Sumptuous Cerise.

With the colour decided I headed to the next step which was picking a size. I have to say that I did find the sizing on the site confusing. In my experience an English size 8 is normally a European 42 and an American 11 which isn't what is listed on the site. They do have a size guide that you can print off and measure your foot against but in typical lazy fashion I just went with an English size 8 and hoped for the best.

The shoes arrived in the post a couple of days later and because they are flat and compact were able to be posted through the letterbox. This is a real bonus for me as usually I'm knocking on neighbours doors or stuck at the sorting office for hours trying to pick things up! 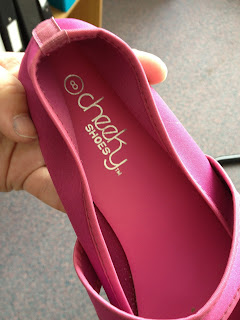 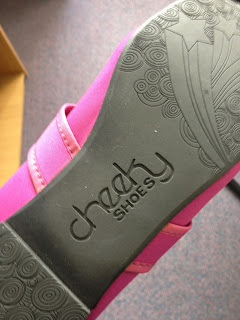 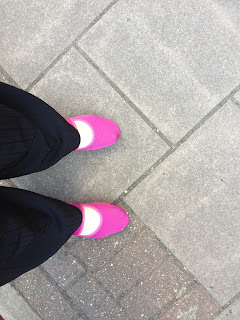 I had LOADS of comments on the first days of wearing them asking where they were from, commenting on the colour and asking how comfortable they were. So you know where they are from, the colour is amazing and I'm definitely going to have to try out more colours.

How comfortable are they? To be honest they feel like slippers. They are uber comfortable! There is a proper sole and because the fabric is so soft there was no rubbing at all,even on the first full day of wearing them when I thought I would test them properly during a nine hour work day!

Size wise they are ok. I have mahoosive feet so if I honest then another half a centimetre of fabric and sole would've genuinely meant that I could never be parted from them. As it is the top of back of the heel starts feeling tight after a full day at work but that would be my only complaint!

I always love to receive emails offering me fab products to try and what better product to be offered than cake!! Baker Days sell personalised 'letterbox' that can be delivered by post to your door. They offered to send me the Valentine version for my gorgeous boy which comes in a plain white box so you can keep it a surprise. The cake comes in it's own funky tin and the Valentine version comes complete with a small pack of love hearts too: 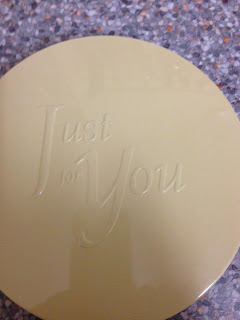 I was able to choose the design that I wanted for my cake and also to personalise it. I was worried that it may look too 'girlie' when it came but actually it was really cute and the boy liked it too: 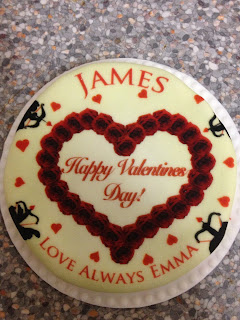 I (surprisingly!!) opted for double chocolate chip cake but you can also go for sponge, carrot, fruit or gluten and wheat free so all tastes are definitely covered. The cake was so soft and lovely and delightfully rich. 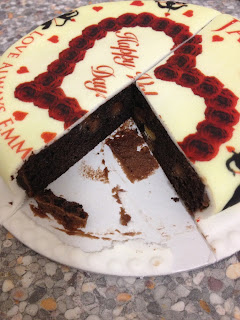 They come in different sizes according to your occasion: