Ok so we are now into week 3 of the virtual focus group. I am completely up and running and now Wireless (through a wireless dongle!!) which is very exciting!  This week it’s all about the photos. Now as most of you know I’m a big fan of the photos and spend a lot of money on getting copies printed off. I currently have a whole memory card of full of pics waiting to be printed so this was quite a good challenge for me. Both printers have the awesome capacity of being scanners as well as printers so I’ve been getting to grips with that this week.
Another thing that both printers have is the ability to print straight from the camera memory card or from a USB. Again super easy on both and not much to choose between them.  The Kodak wins slightly on this as my memory card wouldn’t fit into the HP so it’s much easier personally to print photos directly onto the Kodak.  The next biggest test then is in the quality of the print and the colours that they produce. Each comes with their own specific paper and these are ones that I printed off and then scanned in: 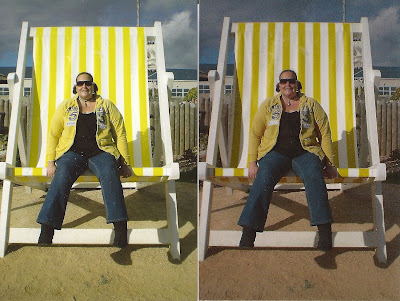 What do you think? I prefer the one on the left which is from the Kodak print because the colours are much brighter and it keeps the focus of the picture much more than the HP does. Another thing that I didn’t like about printing pictures on the HP was that you could see the lines of printing and that didn’t happen on the Kodak. I printed at least 15 off on each to compare the quality.
Ok so with that done the lovely Thom from HP, who is our printing guru, suggested that we do the ‘water test’. It involves using the photos from above and submerging them in water to see what effect it has on the durability of the paper and the quality of the print: 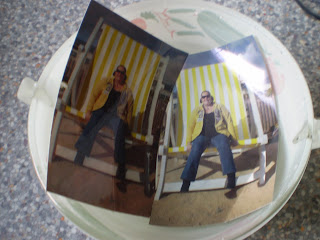 Immediately the colour started to slide off the HP paper and when I took them out and rubbed the corner of the picture, this is what happened: 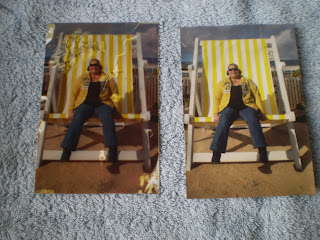 Again the colour slid straight off the HP paper but the Kodak held its own.  As a final test I turned them upside down and lent then on the towel to mop up the excess water. When I put them back they looked like this: 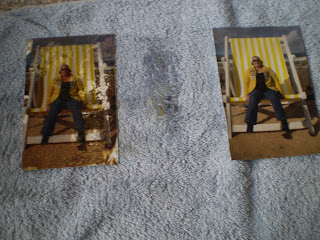 For this task I have to say that the Kodak definitely came out on top. I would've expected them to perform about the same with this so I'm really surprised that the HP paper did so poorly. I'm wondering if the fact that the Kodak  prints had a while longer to dry had anything to do with it???
If you have any questions about the tasks or the printers then please feel free to ask!
Posted by Emma at 17:17 No comments:

Please watch the Vlog above to find out how to enter the giveaway to win a Dodo Household Stuff Book worth £18.95!!!

As you can see from the video the household stuff book is fabulous and really helps you to get organised. I love that I can keep all the important stuff securely in one place rather than thrown in a drawer somewhere!!  If you aren't lucky enough to win the giveaway you can buy your very own copy here. They also sell extra pages  for the stuff book so you can add to it over the years or if you have a large family.
Lord Dodo on Facebook
Lord Dodo on Twitter
You can also follow me here if you would like to :-)
Only open to UK entries only sorry!!

A few weeks ago I was invited by Nutella to attend a ‘breakfast briefing’ at Stockley Farm in Cheshire and I could take Chick along with me.  As it was during half term I said yes that would be fabulous!! We were very
much looking forward to the day out and to meeting up with some of my fellow bloggers.
Before the big day the lovely Scott who was co-ordinating the day sent us this little surprise: 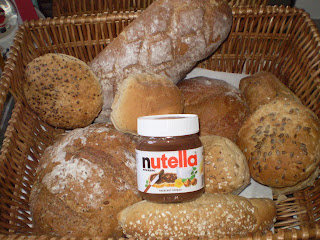 A lovely basket of fresh bread and a jar of Nutella. Mmm, mmm, mmm. Now I’m sure some of you are thinking Hmm….Nutella, what a terrible thing to feed to your child! Well you are entitled to your opinion but Chick is a big fan and as with everything in life it’s all about moderation. Nutella contains less than sugar than
jam!!
Did you also know for example that 1 in 4 children go to school without any breakfast at all??? Isn’t that a ridiculously high figure?! I would much rather Chick went to school having had Nutella on toast than not eating anything at all.
Unfortunately we were unable to make the day out at the farm as Chick had an ear infection and didn’t feel too great but I know everyone else had a great time. They got to cook with a Chef and had a breakfast briefing with a Psychologist and a Dietician and the sun even managed to shine down at the Farm!!! What a shame we couldn’t go......maybe next time J 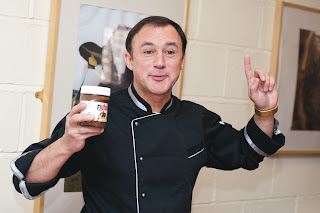 What seems like ages ago now, I was asked if I would like to take part in a virtual focus group for HP. It involves them sending me two printers and testing them out. I get to say what I like and dislike about each one after each week’s challenge.
Now in typical Emma style I’m late in getting started.....partially because I was late receiving them but also because I’ve been having far too much fun living life. It may have also had something to do with the fact that I’m technophobic and was worried about putting them together!!! Something that I should have thought about before offering to take part is exactly where I would store two printers in my teeny house......    The first thing that I will say about both is that there is a lot of packaging! Each little bit is taped down and comes in separate bags as well as in huge boxes.
I started with the HP Photostart Premium: 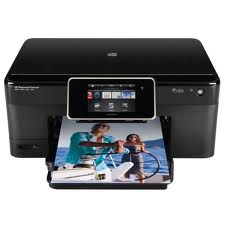 It is very stylish and sleek and looks lovely. It has touch screen technology and was fairly easy to set up although it did take about 45 minutes. I struggled with fitting the ink into the spaces but I think that’s just because it was the first time and I needed to figure it all out.
Next up was the Kodak All-in-One Printer: 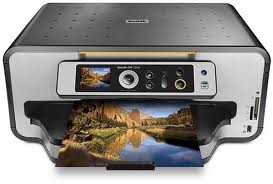 I'm not quite as keen on the appearance of this one as it looks quite clunky next to the HP. The screen is really easy to use and navigate. This took about an hour to set up although most of that time was just waiting for it to configure. What I really liked about this was that it only had two ink cartridges that were very simple to fit and I think they will be cheaper in the long run.
Both printers scan and copy as well as print and are set up to use wireless but there is a slight problem in that I don’t have it! Neither printer comes with a USB lead which I was very disappointed with and had I gone out and bought either one would be really quite cross that it wasn’t included and didn’t state that clearly on the box. As it stands at the moment they are all set up and ready to go and I’m waiting for the two USB leads to arrive so that I can actually start printing!!!
Watch out for the printer challenges over the 4 or 5 weeks!!!
Posted by Emma at 22:46 No comments: