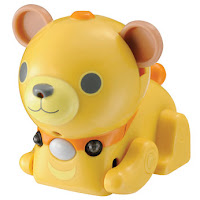 The Micro Pets-i move, walk, sing, chase the ball and act as if they have a mind of their own. They interact with each other and play games together. Each one has their own 'special' talent! This is Chick & The Punk reviewing them:

My opinion: The first thing that you will want to know about these as a Parent is exactly where the off switch is!!! Within 10 minutes of the kids reviewing them, I was begging them to turn them off because they just don't stop squeaking.  The kids claim to love them but since they first opened them they actually haven't touched them!!
I guess they would make ok stocking fillers if you don't mind the £9.99 price tag. Would I buy these for Chick? No, probably not but then I'm tight and she has far too many toys anyway :-)
Would you like the chance to become a Toyologist from now until Christmas? Them make sure you enter the fab competition that Toys R Us are running until 21st November.
Posted by Emma at 21:06