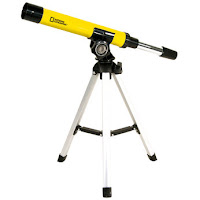 I imagine you've gathered by now that we are Science Geeks in the Brooks household so imagine our joy when this beauty arrived in our last box. The National Geographic land and sky telescope is perfect for Chick's age because it's simple to put together and really lightweight. It also only costs £12.99 which is an absolute bargain!
Chick is quite lucky in the fact that not only does she have one set of Grandparents but we're very close to Nelly's family so we get her Parents too who Chick calls Grandpa and Nanny. They have an awesome cabin on the river so when we went there at the weekend Chick wanted to take this with her and let Grandpa help he find stuff. This is them trying it out....even in the cold and rainy night:

They both had good things to say about the Telescope but because the weather wasn't so good Grandpa is coming around tomorrow night for a star gazing session!! Bless him!!
If I was being fussy the only downside would be that it didn't come with a star gazing book which of course was the first thing that Chick wanted to do with it but generally this gets a huge thumbs up from the whole family!
Don't forget to check out Toys R Us on Facebook to see all the other Toyologists review and some fabulous ideas for Christmas!!!
Posted by Emma at 22:11